Over the past six months, CeReNeM has hosted its third Speculations in Sound research network gathering, which welcomed guest speakers including Joseph Browning (University of Oxford) and Jennifer Torrence (Norwegian Academy of Music), as well as representatives from a number of industry and third sector organisations, including Alyson Frazier (Play for Progress), Almir Koldzic & Dijana Rakovic (Counterpoints Arts), Tim Rutherford-Johnson (independent music critic), Juliet Fraser (independent musician), and Claire Docherty (Sonic Bothy). The network also welcomed Prof. Cat Hope (Monash University) to speak during hcmf//, discussing her recent wordless opera and her approach to inclusivity in this project. The Creative Coding Lab welcomed Volker Böhm (Musik-Akademie Basel Hochschule für Musik) who discussed some of his recent coding projects and how they relate to his musical practice.

In November, the Fluid Corpus Manipulation (FluCoMa) team hosted their third plenary activity, bringing together creative artists from the first and second FluCoMa showcases together to share their thoughts and reactions to the latest iteration of the FluCoMa toolbox. The plenary welcomed guest speakers Dr Alice Eldridge (University of Sussex) and Dr Michael Zbyzsynski (Goldsmiths) to discuss their work in creative computing, machine learning and computer-derived decision making. The first creative showcase of work utilising the FluCoMa toolbox was presented at the Reactive Flows concert as part of hcmf// and featured performances by Rodrigo Constanzo, Lauren Sarah Hayes, Olivier Pasquet, Owen Green, and Leafcutter John.

The IRiMaS project is now well underway. Many aspects of its innovative approaches to music analysis and musicology were presented at further international and local conferences over the last six months. Michael Clarke, Keitaro Takahashi and Frédéric Dufeu presented and discussed the latest TIAALS (Tools for Interactive Aural Analysis) software to 24 postgraduate and postdoctoral students at the annual workshop of the Society for Music Analysis in Southampton at the end of July; they also delivered a formal talk at SMA conference immediately following. Maria Donohue, Amanda Bayley and Michael Clarke presented the IRiMaS strand on improvisation at the 5th edition of the Tracking the Creative Process in Music conference in Lisbon on October 10th. Michael Clarke and Frédéric Dufeu presented a talk, co-authored with Keitaro Takahashi, at the Society for Music Theory in Columbus, Ohio, on November 9th, discussing the potential of software developments for investigating musical data with dynamic charts and visualisations. Finally, Keitaro Takahashi and Frédéric Dufeu presented their work on TIAALS as software developers at CeReNeM’s Creative Coding Lab on December 2nd.

Philip Thomas‘s Cage Concert project, a joint AHRC-funded endeavour by the Universities of Huddersfield and Leeds, launched its final and most significant outcome for the project, the Cage Concert website cageconcert.org. The new cageconcert.org website includes a series of documentary films made with musicians from acclaimed new music ensemble Apartment House about performing the Concert, and two new interactive apps that enable users to engage with the notations and with audio samples and recordings, to create their own realisations and new audio versions of the work. Congratulations to Philip Thomas, Martin Iddon, Christopher Melen and Emily Payne for this incredible work. 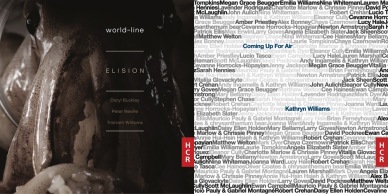 Recent recordings from HCR and CeReNeM staff have received noteworthy attention, including inclusion on several ‘best of’ lists:

In September Prof Robert Adlington hosted the 11th Biennial International Conference in Music after 1900, which involved 60 speakers representing institutions from across North America, Asia and Europe. A highlight of the conference for all delegates was the three performances by CeReNeM postgraduate composers and performers Dejana Sekulić, Irine Røsnes, Maria Sappho, Brice Catherin and Pablo Galaz. In December, he attended the formal launch of his volume New Music Theatre in Europe: Transformations Between 1955 and 1975, which took place at the Fondazione Giorgio Cini in Venice, and involved presentations from me, Professor Jonathan Cross (University of Oxford) and Alessandra Carlotta Pellegrini (Fondazione Isabella Scelsi). He also gave a presentation at the third British Music Collection Study Day at Heritage Quay in Huddersfield. Robert has multiple forthcoming publication activities, including the final editing for his volume ‘Finding Democracy in Music’, co-edited with Prof Esteban Buch (EHESS Paris); the preparation of the proceedings of his study day on democracy at the 2018 Darmstadt Summer Course for publication in the Darmstädter Beiträge zur Neuen Musik; continued progress with his forthcoming monograph ‘Musical Models of Democracy’; a programme-book essay on musical modernism for the London Sinfonietta; and a review of Jonathan Impett’s recent book on Nono for the journal Notes.

Prof Monty Adkins‘ work has been programmed in several international venues over the past few months. In October, Monty’s work Symbiont was performed in Reynolds Recital Hall at the Montana State University School of Music as part of their Sunday Night Multimedia Series, Rondures, a co-composition with Paulina Sundin, was performed by the Stockholm Saxophone Ensemble at the ECCO concert at the Royal College of Music, Stockholm. In December, his work Secret Dreams was included as part of ambientblog.net’s 8-hour Winter Solstice ambient music special for Dutch Radio Station Concertzender Nederland. His work Saenredams Dream was released on the final release by Eilean Recordings – Eilean 100 – six hours of music featuring everyone who contributed to the five year project. Music Beyond Airports: Appraising Ambient Music, edited by Monty Adkins and Simon Cummings, has been downloaded over 10,000 times, making it one of the most popular publications on University of Huddersfield Press.

In July, Prof Bryn Harrison was invited by Prof Lisa Lim (University of Sydney) to present a paper at the the Music and Ecological Time Symposium at Sydney Conservatorium, before spending two weeks in September as one of three guest professors to teach at the 9th International Young Composers Academy in Tchaikovsky-city, Russia. The academy saw him give guest talks on his music as well as receiving performances both in Tchaikovsky-city and Moscow of his piece Rise, performed by the Moscow Contemporary Music Ensemble (MCME). On the 24th September his piece How Things Come Together for 23 performers was premiered by Ensemble Contrechamps in Geneva. The project, funded by the Ernst von Siemens foundation, saw the ensemble spend a further two days recording the piece in Zaragossa, Spain, for a forthcoming recording on the Neu label. In December Bryn returned to Zaragossa with Ensemble Plus Minus to record Repetitions in Extended Time, which will also be featured on the disc. At hcmf// this year Bryn’s new work Dead Time was premiered by the Wet Ink ensemble, and received its second performance in New York city on December 13th at St Peter’s Church, Chelsea. More recently, Receiving the Approaching Memory received its seventh performance by Mark Knoop and Aisha Orazbayeva at Kettles Yard, Cambridge on 23rd January, 2020. Many congratulations, as well, to Bryn for the honour of being promoted to the role of Professor of Composition.

Dr Mary Bellamy has recently completed two pieces slated for performance and recording in early 2020. Her piece behind the transparent surface will be premiered by Ensemble Musikfabrik in Cologne, Germany, in March, while her forthcoming piece for ELISION Ensemble will be premiered at the ISCM World Music Days in Auckland, New Zealand, in April, with a further performance in Melbourne in May. Both works will be recorded for release on Huddersfield Contemporary Records on an upcoming portrait CD in autumn 2020.

In addition to wrapping up the Cage Concert project, Prof Philip Thomas has completed a busy period of activity, releasing three featured recordings on Another Timbre—a selection of chamber work by Adrián Demoč, a collection of pieces by Ryoko Akama, and a 5-CD boxset of Morton Feldman’s solo piano music—as well as featuring on Chris Burn’s record as if as, released on confront recordings. Philip’s 2-CD collection of music by Christian Wolff—Preludes, Variations, Studies and Incidental Music—was included in The Quietus’ Albums of the Year, while his release of Feldman’s Piano Music was listed 5th in The Wire’s Top 50 Releases of 2019.  Philip has also performed extensively over this period, with notable performances taking place at Cafe Oto, UK; MACBA, Barcelona; Chappel Hill, Sheffield; FAB Festival International des Arts de Bordeaux Métropole; and hcmf//.

Prof Aaron Cassidy‘s work A republic of spaces, written for percussion trio Line Upon Line, had three performances in Austin, Texas, and was featured in the trio’s autumn European tour, with performances at the Hochschule für Musik Freiburg, Germany; City University, London; and Open Circuit Festival, University of Liverpool. The trio also recorded the work in November for a future CD release on the Kairos record label. Meanwhile, The Crutch of Memory was performed by Karin Nakayama in Shimokitazawa, Japan, in September. Aaron was also invited as a panelist at November Music/Buma Cultuur New Music Conference, ‘s-Hertogenbosch, the Netherlands, and he was on the juries for the IN VITRØ sonic arts exhibition in Matera, Italy, and for UNM Danmark—the Danish branch of Young Nordic Music Days—for the UNM 2020 festival in Tampere, Finland.

As part of his British Academy Postdoctoral Fellowship on music and the transition to democracy in post-Francoist Spain, Dr Igor Contreras Zubillaga convened, in collaboration with Giulia Quaggio (Universidad Complutense de Madrid), the International Conference ‘Arts and Models of Democracy in post-authoritarian Iberian Peninsula’ (University of Huddersfield, 28-29 November 2019). This event brought together scholars from Spain, Portugal, the US and the UK to engage in an interdisciplinary and comparative debate on how the field of artistic culture (literature, visual and plastic arts, cinema and music) framed different ideas of democracy in the Iberian post-authoritarian transitions during the 1970s and early 1980s. Igor has also given papers at the Eleventh Biennial International Conference on Music Since 1900 (University of Huddersfield, 8-10 September 2019) and the 55th Annual Conference of the Royal Musical Association (University of Manchester/Royal Northern College of Music, 11-13 September 2019). Igor was a Visiting Scholar at Harvard University in November, where he spent several weeks.

Dr Ben Spatz has given talks and workshops at Trier University (GER), the Lithuanian Academy of Music and Theatre (LTU), and the Royal Central School of Speech and Drama (London, UK). They’ve also finished work on two books, Blue Sky Body: Thresholds for Embodied Research (Routledge 2020) and Making a Laboratory: Dynamic Configurations with Transversal Video (Punctum Books 2020), as well as convening the Embodied Research Working Group at the International Federation for Theatre Research in Shanghai this past summer. Ben’s Windows into Worlds exhibition is running at Temporary Contemporary Market Gallery in Queensgate Market, co-created with Rowan Bailey from the School of Art, Design and Architecture, and with additional support from the Department of Music and Music Technology. All are welcome to visit the six-screen video exhibition and the participatory “Open Lab” installation.

One of the flagship institutes of the University of Huddersfield, CeReNeM’s research team brings together world-leading researchers and artists at the cutting edge of contemporary music performance, composition, music technology, new sonic media and new music studies.